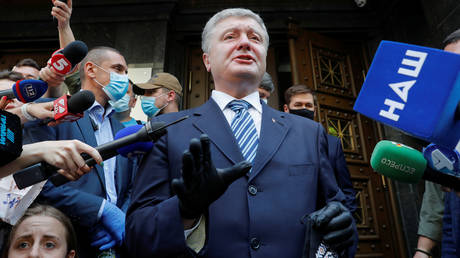 The Ukrainian Prosecutor General’s Office has launched a criminal case into an alleged coup plot by former President Petro Poroshenko and his associates, an opposition MP has announced, publishing scans of the relevant documents.

“I publish documents … about launching an investigation into the facts of illegal seizure of state power, large-scale embezzlement and legalizing ‘dirty’ money by an organized criminal group” which Poroshenko was allegedly part of, Renat Kuzmin, an MP for the ‘Opposition Platform – For Life’ political party, wrote on Facebook.

Kuzmin also attached scans of the response from the Prosecutor General’s Office to his enquiry on the launch of the criminal case. According to the papers, Poroshenko was investigated over coup attempts in 2013-2014 and in 2020.

His presidency was marred by deadly conflict in Eastern Ukraine, the sharp decline of the country’s economy and accusations of corruption. Last year, Poroshenko failed to get reelected, losing to Volodymyr Zelensky by a landslide, but chose to remain in the Ukrainian politics as the head of the opposition European Solidarity party.

The 55-year-old is involved in multiple criminal cases in the country, both as a suspect and witness. Poroshenko’s lawyers earlier claimed that all the criminal cases against their client were “fake” and lacking any legal justification, insisting they were launched and investigated with the sole purpose of “pressuring the opposition.”

Also on rt.com
He who pays the piper? Leaked tapes of Poroshenko-Biden calls fuel suspicions post-Maidan Ukraine is effectively US client state


Zhvania himself came to the police, confessing to being part of a power grab in 2013-2014. The former MP earlier claimed that Poroshenko deliberately instigated tensions during the so-called Maidan protests in Kiev, being behind an attack on a prominent journalist and the kidnapping of demonstrators.