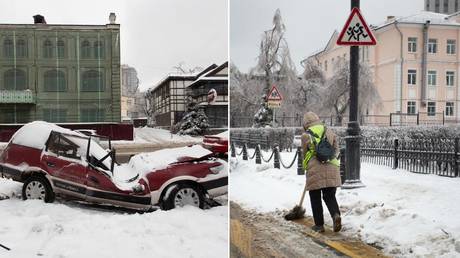 Strong winds and ice cold downpours have struck the city of Vladivostok in the Far East of Russia, leaving thousands without power, electricity and running water. The local government has officially declared a natural disaster.

As many as 120,000 homes were initially affected and, as of Friday, more than 1,500 households in the area were reportedly still cut off from the grid, with many having also lost their central heating. Although temperatures remained comparatively mild, at -1 degree Celsius, the combination of heavy snowfall and high-speed gales disrupted infrastructure and even caused damage to buildings.


In viral footage shared widely on Thursday, Alexander Zhuk, a Vladivostok native, narrowly escaped being crushed by a giant slab of concrete that fell onto his car, which he had been de-icing. He was later pictured next to the written-off vehicle, drinking a beer and celebrating his lucky escape.

The incident underlines concerns from the city’s residents that the fresh snow and freezing temperatures are taking their toll on the older high-rise residential blocks that are a staple in many Far Eastern cities. Some locals also woke up to find their cars virtually entirely frozen by sweeping ice rain that fell across the region overnight.

The Komsomolskaya Pravda newspaper published disturbing images on Friday that purport to show the “first fatality” from the weather, with a body laying in the snow in one of Vladivostok’s parks. Local authorities have since confirmed that the man was a 60-year-old of no fixed address. Police are investigating the circumstances surrounding his death.

A state of emergency has been in place across the region since Thursday, and temporary shelters offering food, warmth and psychological support have been set up for those unable to stay at home. Authorities warn that conditions could continue to worsen. In the longer-term, scientists warn that extreme weather could become more and more frequent as a side effect of climate change.