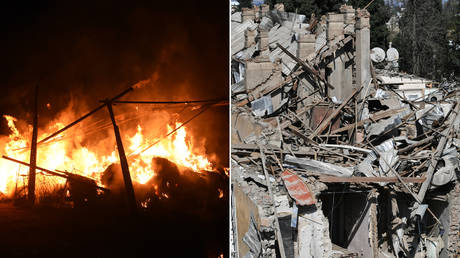 A Russia-brokered ceasefire in Nagorno-Karabakh came under intense pressure on Sunday, as both the Armenian and Azerbaijani sides traded accusations of violations ahead of a planned swap of prisoners and bodies.

Military action continues in the armed conflict over the disputed part of Azerbaijan, which escalated two weeks ago to a level unseen since the 1990s. Azerbaijan and Armenia, which supports Nagorno-Karabakh, agreed on Friday to take a humanitarian pause after lengthy talks in Moscow. But there have been reports of violence from the region a day after the ceasefire was supposed to come into force.

Meanwhile, artillery attacks against Nagorno-Karabakh’s main city Stepanakert continued overnight, but have mostly ceased in the morning, an RT correspondent on the ground reported.

The morning is quiet in #Stepanakert – in contrast to what’s been going on all night. Air raid sirens and about a dozens of explosions around the city. So far the ceasefire seems to extend only to daytime. #NagornoKarabakh#Karabakh

Arayik Harutyunyan, the leader of the disputed Nagorno-Karabakh Republic, said Azerbaijani forces unsuccessfully tried to take the town of Hadrut. He also voiced doubts that the exchange of prisoners and war dead, which was the main justification for the ceasefire, could start on Sunday as planned.

In the meantime, Yerevan pressed fresh claims of foreign involvement in the conflict. An Armenian Defense Ministry representative accused Israel and Turkey of “sending drones to Azerbaijan disguised as a humanitarian cargo,” without offering any further details.


Meanwhile Armenian Prime Minister Nikol Pasynyan has called on peoples of the world to support Nagorno-Karabakh’s bid for “self-determination”.“If governments and parliaments wouldn’t [recognize it], peoples, individuals and organizations can,” he said on Facebook.

Yerevan, which supports Nagorno-Karabakh militarily, doesn’t formally recognize it as a sovereign state. During the ongoing escalation, Pasynyan mused that this could change, but stopped short of taking practical steps towards such a move.

Also on rt.com
Armenian/Azeri ceasefire in disputed Nagorno-Karabakh not a replacement for ‘permanent solution’ to conflict, Turkey says


During a media briefing on Sunday, Arayik Harutyunyan, the Nagorno-Karabakh leader, said unless Azerbaijan shows willingness in the coming days to resolve the situation peacefully, he would file a formal request with Armenia to move forward with the recognition of its independence.