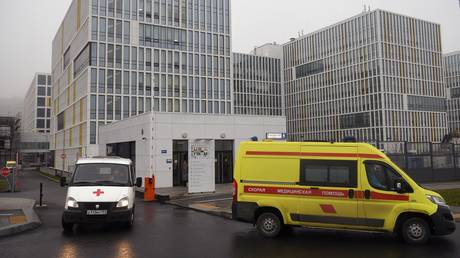 Clouds of what appeared to be “smoke” have been filmed billowing over Kommunarka Hospital – the largest Covid-19 treatment facility in Moscow – after an oxygen delivery pipe exploded. Luckily, no casualties have been reported.

A witness living in a nearby apartment told RBC business daily on Wednesday evening he had heard a “loud noise” resembling an explosion before seeing “smoke” rising over the hospital facilities. Social media clips showed large black and gray plumes billowing over the so-called reserve section of the hospital. The extra facilities were added to accommodate the rising number of Covid-19 patients.

The incident was caused by an explosion of a major pipe that delivered oxygen to one of the hospital’s intensive care units, a source within the emergency services told the TASS news agency. It has since been confirmed that there were no injuries.

Earlier reports suggested the explosion could have caused a fire and led to a partial collapse of one of the building’s walls, but this has been refuted by rescuers.
Fortunately, the incident did not interrupt the work of the hospital, as the affected building was still under construction and no one was inside at the time of the explosion. Emergency officials said there had been no threat to patients or hospital staff.

The “smoke” the witnesses saw was, in fact, oxygen coming out of the ruptured pipeline, they added.

Kommunarka is one of Russia’s top Covid-19 hospitals, and was one of the first to admit patients suffering from the novel coronavirus infection during the first wave of the pandemic. President Vladimir Putin paid an official visit in March this year.

Initially, the facility had a total of 802 beds, but its capacity has been since expanded to accommodate more than 2,000 patients. Nonetheless, the hospital’s director, Denis Protsenko, recently admitted that the hospital currently has virtually no space left.