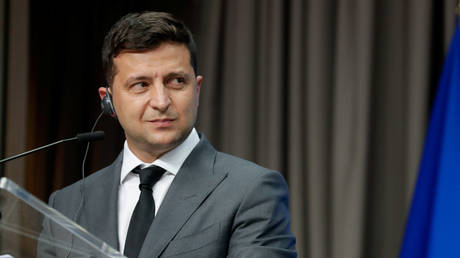 Ukraine’s top court has ruled that Volodymyr Zelensky must only use the country’s state language when exercising his official duties as president, after a citizen claimed he broke the law by speaking Russian at a public event.

The legal case was set in motion after a citizen filed a complaint against Zelensky for delivering a speech in Russian at an IT-themed forum in Kiev in May 2019. The person asked the Supreme Court to rule that Zelensky had broken the law by not using Ukrainian – the country’s sole official language, according to the constitution – while exercising his presidential duties.

Zelensky is a native Russian-speaker, from the industrial city of Krivoy Rog, and like most Ukrainians of his generation, outside of the West of the country, he would have had little exposure to the native tongue as a child.

The court initially dismissed the claim, but an appeal was then launched. On Friday, the Supreme Court’s Grand Chamber ruled that “the president of Ukraine must use the state language [Ukrainian] when carrying out his official duties.”

However, the court clarified that the president is only subject to legal liability for actions undertaken “when carrying out his constitutional duties.” In other cases, it only constitutes a “political” responsibility. The case was therefore closed, as “the plaintiff’s claims are not subject to consideration in the administrative procedure.”

In 2019, the parliament adopted a bill that made the use of Ukrainian mandatory by state officials and in the public sphere. The bill was signed into law by the outgoing president, Petro Poroshenko, when Zelensky was still president-elect. At the time, many observers felt Poroshenko made the move to make life difficult for the incoming leader, given his preference for the use of Russian.