Prince Charles has revealed his Aston Martin is powered by cheese and wine and expressed his sympathies for Greta Thunberg and groups like Extinction Rebellion and Insulate Britain in a wide-ranging interview on the environment.

Speaking to the BBC in Prince George’s Wood, an arboretum Charles has created in the gardens of his house on the Balmoral estate in Aberdeen, the heir to the throne said he is ‘deeply worried’ about the Earth and said that humans are ‘over exploiting’ and damaging nature.

He also said he understands the frustrations of young people and climate activists because they feel like ‘nobody listens’.

Recalling his own encounter with his Extinction Rebellion, the royal recalled how the group staged a sit-in at his Highgrove estate before leaving a letter praising him for his past comments on the climate.

He also revealed how he doesn’t eat meat and fish on two days a week and dairy on one day.

Most remarkably, he explained how he had his Aston Martin converted so it runs on surplus English wine and whey from cheese production. The car, which he has had for 51 years, now runs on a fuel called E85 – made up of 85% bioethanol and 15% unleaded petrol.

Describing his diet, he added: ‘If more people did that it would reduce a lot of the pressure on the environment.’ 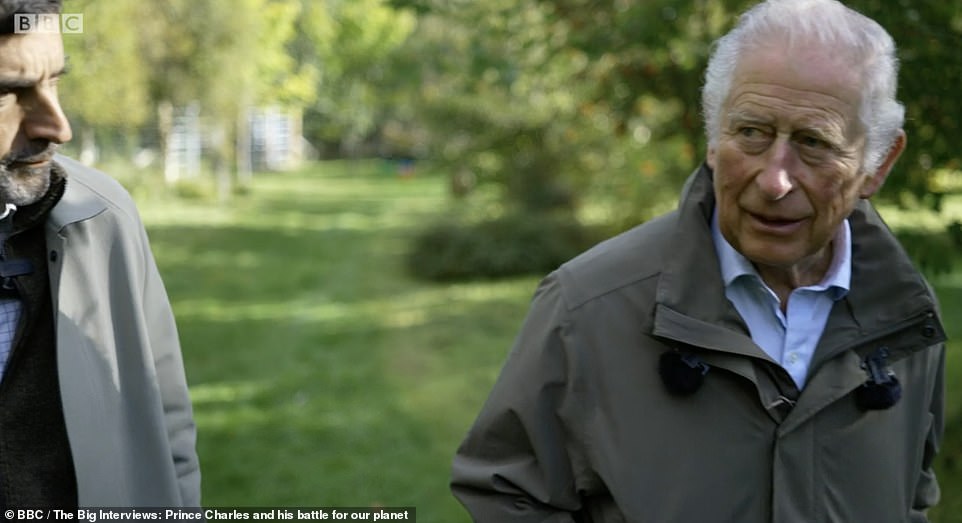 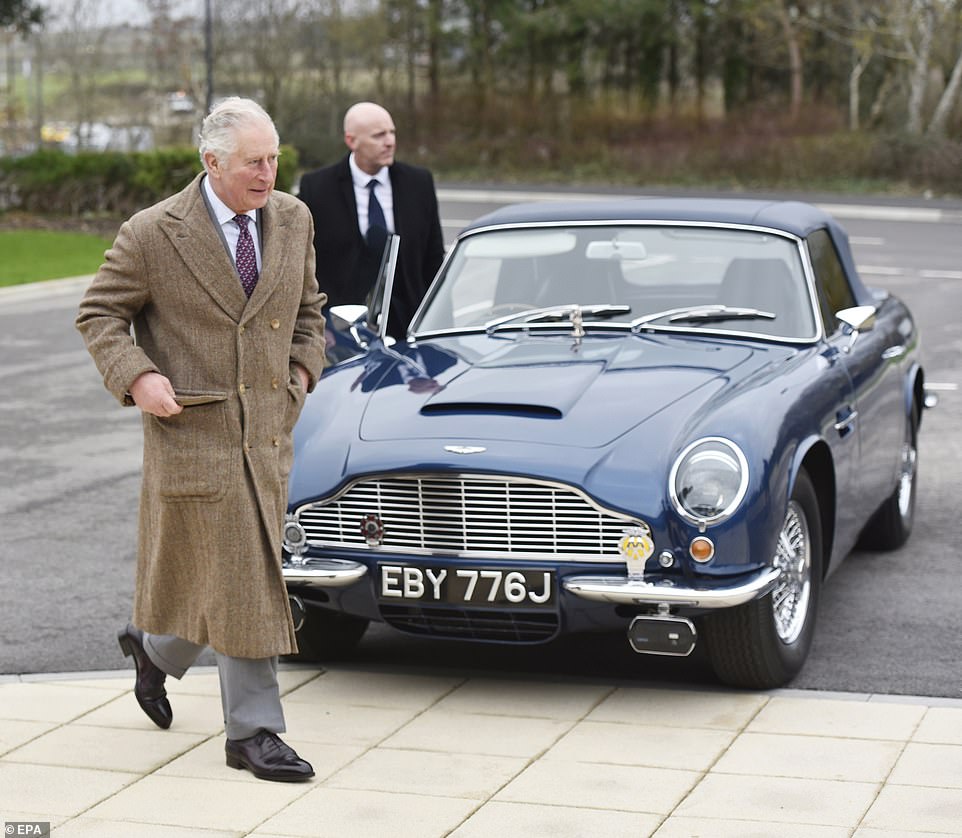 Speaking about Greta Thunberg and other climate activists, Charles said: ‘All these young people feel nothing is ever happening so of course they’re going to get frustrated. I totally understand because nobody would listen and they see their future being totally destroyed.’

Charles, a long-standing environmental campaigner, said it had taken ‘far too long’ for the world to take the climate crisis seriously.

He added: ‘The point is, people should really notice how despairing so many young are.’

Charles went on to list several other green measures he’d taken in recent years as he called on governments to take action.

He said he had switched the heating of Birkhall to biomass boilers, using wood chips from trees felled in the estate’s forest.

The Prince has also installed solar panels at Clarence House, his London residence, and on the farm buildings of Highgrove.

There are also heat pumps at some of his properties and a hydroelectric turbine in the river that runs beside Birkhall.

Despite expressing his sympathies with some climate protesters, he did brand recent demonstrations as ‘unhelpful’.

He said: ‘I understand why they go out but it isn’t helpful I don’t think to do it in a way that alienates people.

‘I totally understand the frustration. The difficulty is how do you direct that frustration in a way that is more constructive than destructive.’

He also criticised world leaders ahead of the Cop26 climate conference in Glasgow, branding their efforts as ‘just talk’. 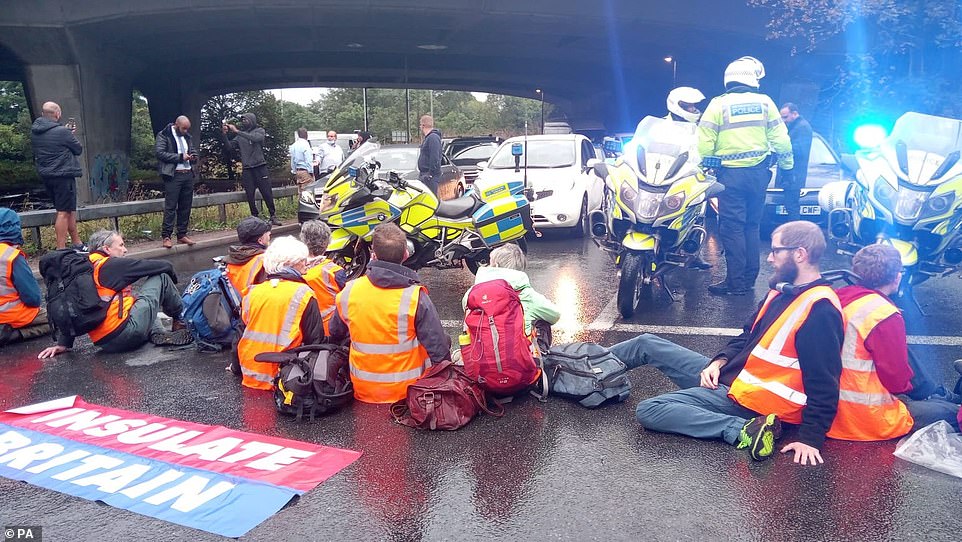 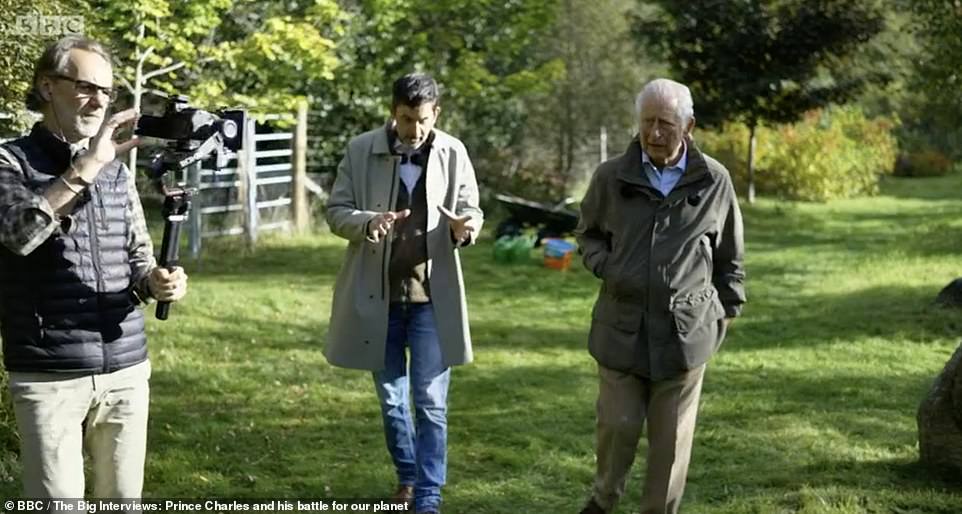 Speaking about Greta Thunberg and other climate activists, Charles said: ‘All these young people feel nothing is ever happening so of course they’re going to get frustrated. I totally understand because nobody would listen and they see their future being totally destroyed’

He added: ‘The problem is trying to get action on the ground which I’ve been trying to do for the last 40 years.’

The prince added that the conference was ‘a last chance saloon’ and said it would be ‘a disaster’ if the world did not come together to tackle climate change.

He said: ‘I mean it’ll be catastrophic. It is already beginning to be catastrophic because nothing in nature can survive the stress that is created by these extremes of weather.’

He also expressed his frustration at how business executives still don’t give environmental issues enough priority and said not enough young people have ‘got to the top’ to make a difference.

The Prince of Wales even took aim at electric cars in his interview, warning that they are too expensive and sharing his worries about materials for their batteries.

He said: ‘At the moment there is a huge amount of waste which is really worrying.’

Charles is due to attend a series of events at Cop26, alongside the Queen, the Duchess of Cornwall, and the Duke and Duchess of Cambridge.

His comments come after weeks of chaos caused by Insulate Britain blocking motorways and other busy roads across the country.

The group is threatening a fresh wave of mayhem if the Government does not agree to its demands. 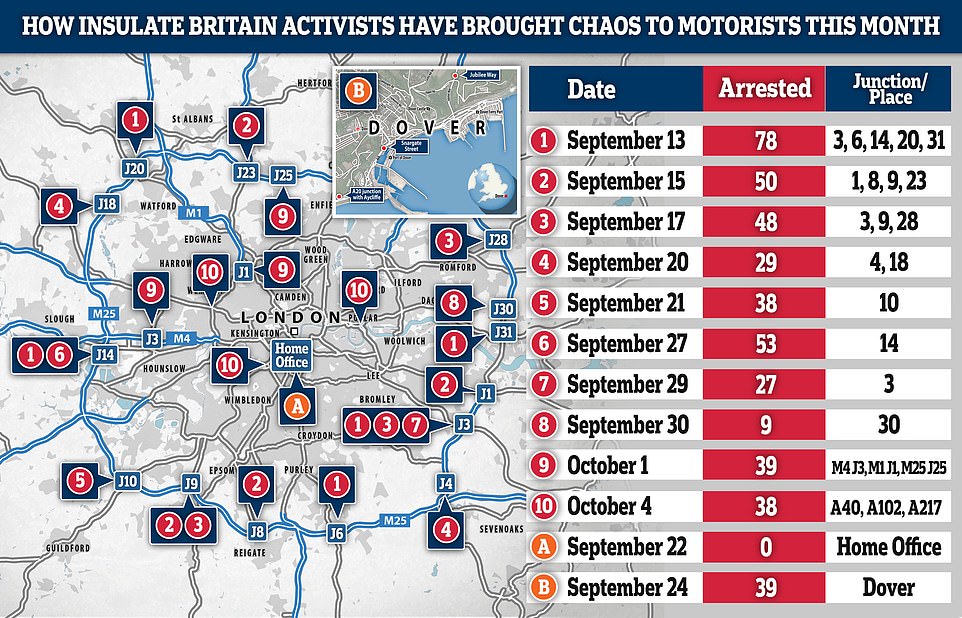 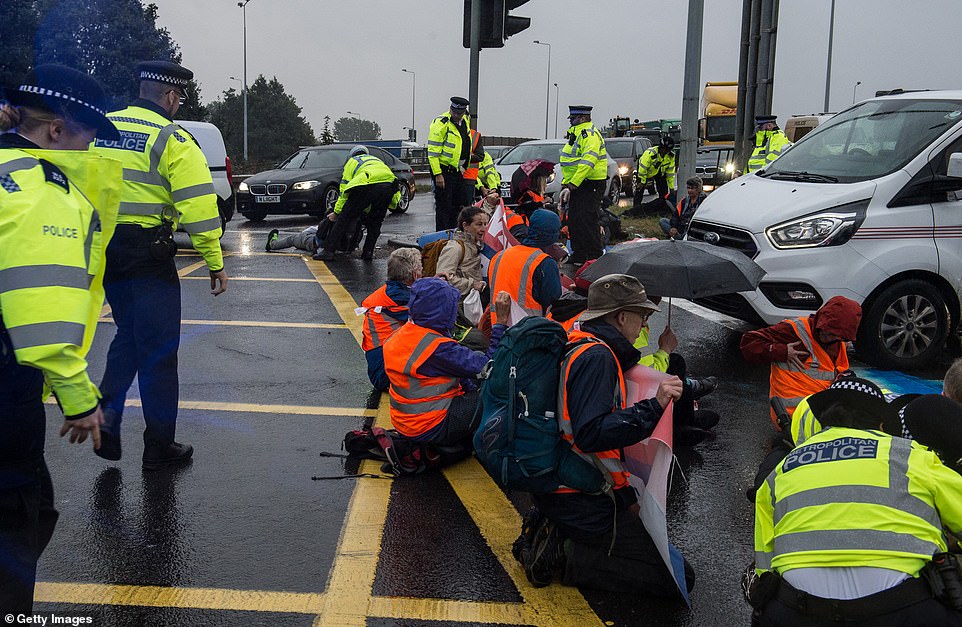 Activists from Insulate Britain are planning to cause more misery by yet again blocking major roads in a series of sit-down protests on Wednesday, it has been revealed

It plans to cause more misery by yet again blocking major roads in a series of sit-down protests on Wednesday.

Activists will warn Boris Johnson that he has ten days to commit to their ultimatum on home insulation before they ‘unleash hell’ on innocent drivers simply trying to get to work or see loved ones.

Johnson plans to hit the activists with huge fines and up to six months in jail with new powers dubbed ‘Asbos for crusties’.

But they remain undeterred and have pledged to ‘create a whirlwind’ in their bid to force the Government to insulate all social housing by 2025.

They want to cause as much chaos as possible in the run-up to the COP26 summit in Glasgow next month, with one ringleader saying it would be the ‘icing on the cake’ if protesters were sent to prison on remand.

Protesters from the Extinction Rebellion offshoot have blocked major roads including the M25, M1 and M4 over the past three weeks, and three court injunctions have now been put in place but demonstrations have continued.

The original injunction, granted to National Highways on September 21, banned the demonstrations on the M25 and was followed by a second approved on September 24 which restricted protests around the Port of Dover.

A third injunction was granted on Saturday, banning them from obstructing traffic and access to motorways and major A roads in and around London.

The Prime Minister said the Insulate Britain protesters, who have blocked highways across the South East in recent weeks, have been ‘doing considerable damage to the economy’.