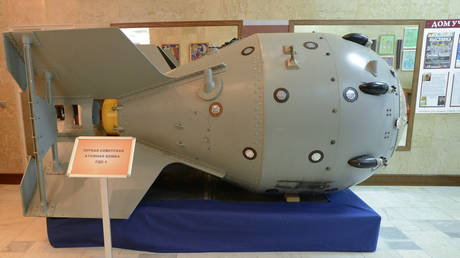 Russian physicist Isaak Khalatnikov, the oldest member of the country’s Academy of Sciences (RAS), has died at the age of 101. The scientist was the last living participant of the team behind the first Soviet nuclear bomb.

The scientist died early on Saturday in Moscow Region, RAS told Russian media. Born in 1919, more than a century ago, Khalatnikov was one of the leading Soviet – and, after the collapse of the Union, Russian scientists in the field of theoretical physics.

Khalatnikov was one of the creators and the first head of the Landau Institute for Theoretical Physics, a prestigious research agency within RAS, leading it from 1964 until 1992, when he stepped down due to his progressing age. The scientist remained the honorary director of the Institute till his death.

To the general public, not that familiar with theoretical physics, Khalatnikov was better known as one of the scientists involved in the creation of the first Soviet nuclear weapon – the RDS-1 bomb. The project was launched by the Soviet Union back in 1942 amid the ongoing World War II and concluded in 1949 with a successful test of the nuclear fission device.

Also on rt.com
Cold War-era Russian nuclear trains could be on track to make return, expert says, sparking fresh fears of confrontation with US


During the war, Khalatnikov served within the ranks of the Soviet military and joined the development only after WWII ended. The scientist, within a group of other physicists, was tasked with calculating the yield of the bomb — a task for which calculations had to be done manually in that day and which could only be taken on by the brightest minds in the field.

“I managed to produce an interpolation formula of extraordinary beauty,” Khalatnikov wrote in his memoirs. “And the calculations corresponded with actual results of the test very well.”

The scientist also took part in development of the first Soviet fusion bomb, which proved to be an even harder mission than the creation of the fission one. Making all the calculations to construct it without computers was described as a “miracle” by Khalatnikov. The fusion bomb project was a success as well, culminating in a successful test mid-1953.