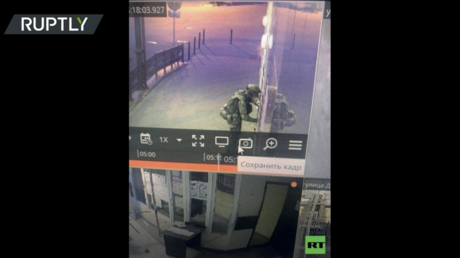 A Russian man suspected of murdering three family members and of setting off an explosion at a police station in the small town of Liski was found on Friday with an arsenal of weapons, including guns, grenades, and cartridges.

According to REN TV, the car of 54-year-old Viktor Mirsky was stuffed with arms. Mirsky had been detained earlier that day after law enforcement officers spotted the suspect’s car in a village not far from the scene of his crime.

A chase ensued, during which Mirsky turned onto a field, it has been reported. He offered resistance and was reportedly shot in the head or neck during the arrest.

Liski is around 500 kilometers south of Moscow, in the Voronezh Region.

At 5:30am on the morning of September 16, a man thought to be Mirsky entered a police station in a military uniform and a bulletproof vest and detonated an explosive device. As a result of the explosion, a policeman received a shrapnel wound to the shin of his right leg.

It was later discovered that a woman, her son, and grandson had been murdered in the village where Mirsky was living. Their bodies were found with gunshots, reports say.

According to a theory published by the Telegram channel Baza, the triple murder may have been motivated by a police decision to side with the people in a dispute over a land plot. The authorities have not confirmed this story.

Mirsky also allegedly booby-trapped his house before he left, with law enforcement reportedly finding a gas cylinder with wires and detonators all over the property.