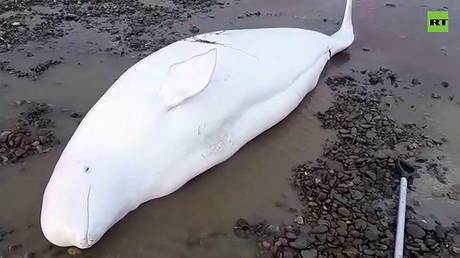 An inspector from Russia’s Emergencies Ministry has been hailed as a hero, after he saved three Beluga whales – two adults and a young calf – that were left stranded on a Far Eastern beach on Thursday, when the tide went out.

Alexey Paramonov said that when he arrived at the scene he saw the animals about 1.5 kilometers from the coast. One of the adults was in a dangerous position, lying on its side, so he dug a hole under the beluga and turned it over to the correct position, while also trying to protect the family from predators. In order to prevent dehydration, he watered their skin and eyes and, with nighttime temperatures below freezing, Paramonov also swaddled the baby to keep it warm.

The dramatic incident occurred in the Khabarovsk region, a vast territory which borders China by land, and is close to Japan by sea, over 6,000 kilometers east of Moscow. A local resident told the Emergencies Ministry at about 4.30pm local time that the animals were stuck at the mouth of the Uda river, which flows into the Sea of Okhotsk, near the village of Chumikan.

The settlement, home to about 1,000 people, is so remote that it has never been connected to the national road network. Thus, access is possible only by sea (which is frozen for close to half the year), helicopter or small plane. It is 480 kilometers from the nearest train station and almost 700 kilometers away from the city of Khabarovsk.

Paramonov remained with the stricken creatures long after it got dark, mindful of the threat from other animals and poachers. At about midnight, when the high tide arrived, the whales safely returned to sea on their own.

Last year, Paramonov also rescued three belugas. Back then three adults found themselves stranded in shallow water and came under attack from crows and gulls, before the hero inspector came to their rescue.