Donald Trump channeled former president Bill Clinton at his Pennsylvania rally Tuesday when he told COVID-19 sufferers ‘I feel your pain’ after his bout with the virus.

‘To everyone fighting to recover from the virus, I feel your pain because I’ve felt your pain,’ Trump told the thousands of supporters packed in on the airport tarmac in Johnstown Tuesday night.

His speech sounded familiar for a presidential campaign, mirroring the words spoken by Clinton during his 1992 race for the White House.

Trump then boasted he is now ‘immune’ from the virus and ‘felt like Superman’ as he vowed ‘we will beat it together’.

His claims of immunity come one day after the US confirmed its first reinfection of COVID-19, of a young male with no pre-existing health conditions.

Cases of the deadly virus have now risen for at least two weeks in a row in 29 out of the 50 US states, according to a Reuters analysis, with average daily cases now topping 49,000 a day nationwide. 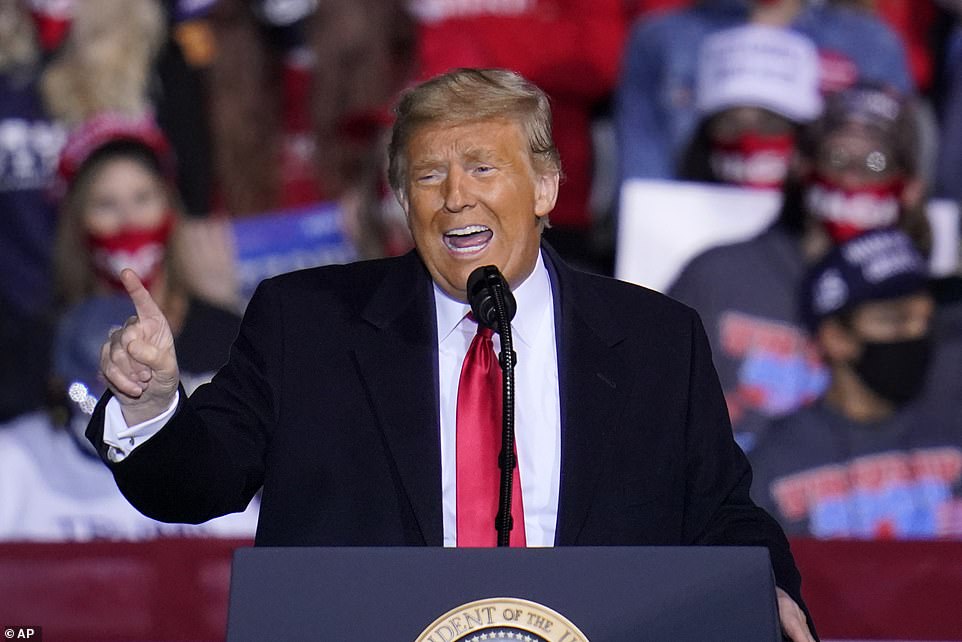 President Donald Trump asked a crowd of supporters in Johnstown, Pennsylvania which ones of them had the coronavirus and boasted that both they and he are ‘immune.’ He also complained that once he caught the virus experts shortened how long immunity would last 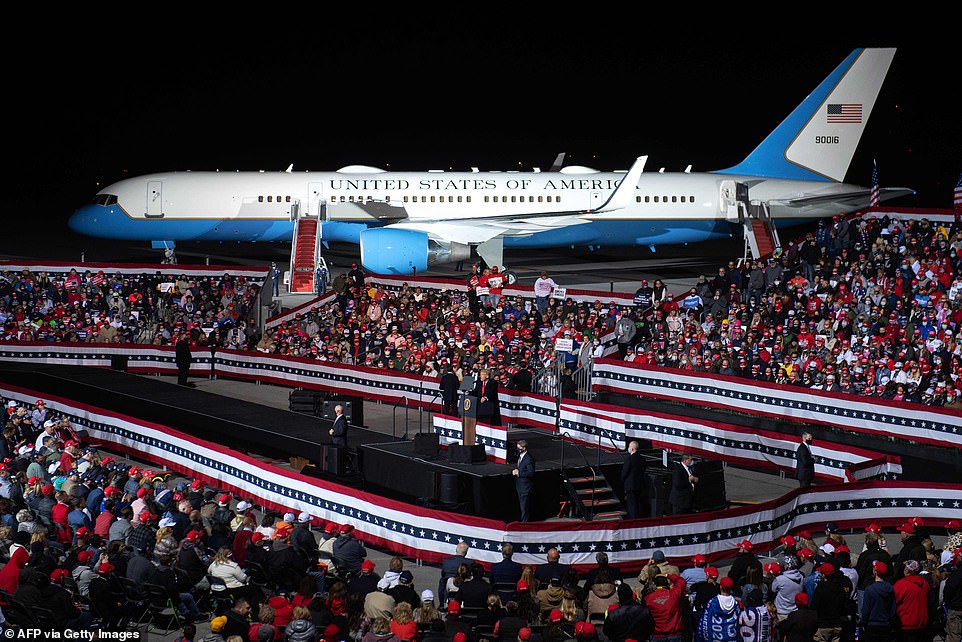 Like he did in Florida on Monday,  President Donald Trump joked about kissing every member of the crowd just days after being hospitalized for the coronavirus. The White House doctor has said Trump is no longer contagious 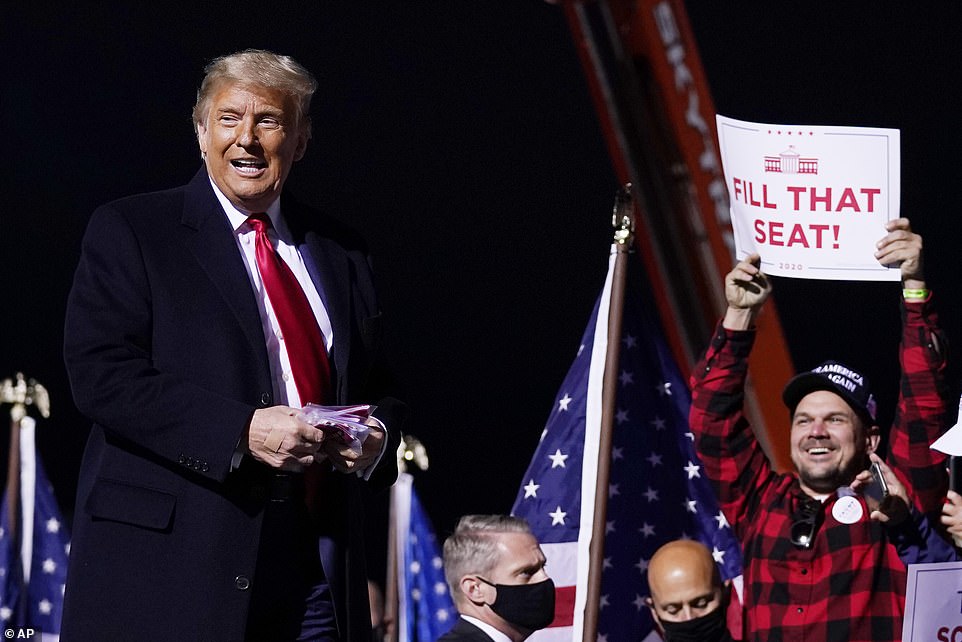 President Donald Trump arrives in Johnstown, Pennsylvania Tuesday night and hands out masks, which many members of his audience refused to wear despite the president coming down with the coronavirus himself 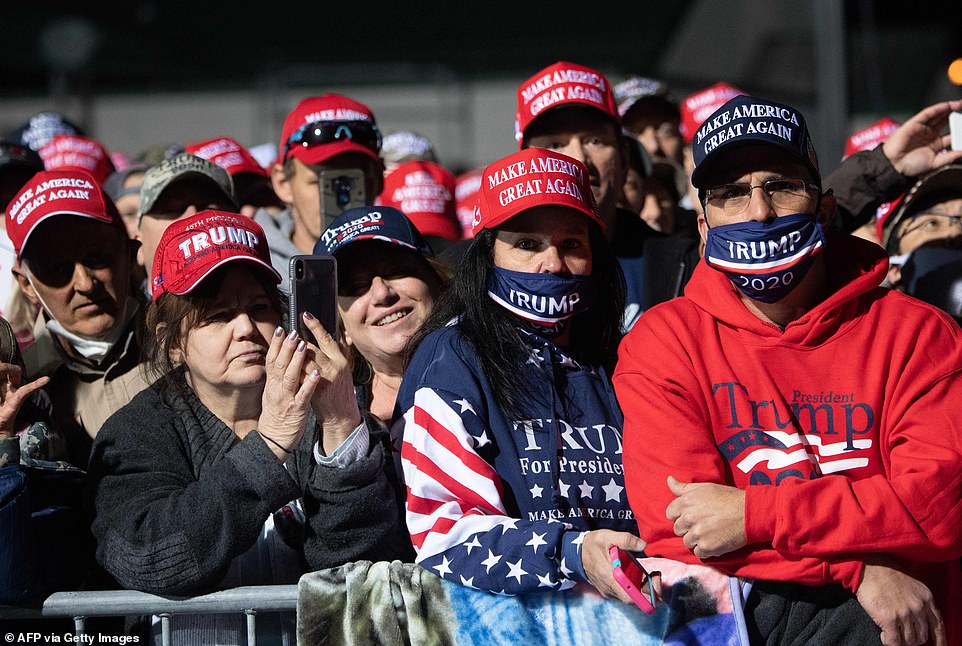 While some Trump supporters sported Trump 2020 masks, many did not as they crammed together to watch the president Tuesday night in Johnstown, Pennsylvania 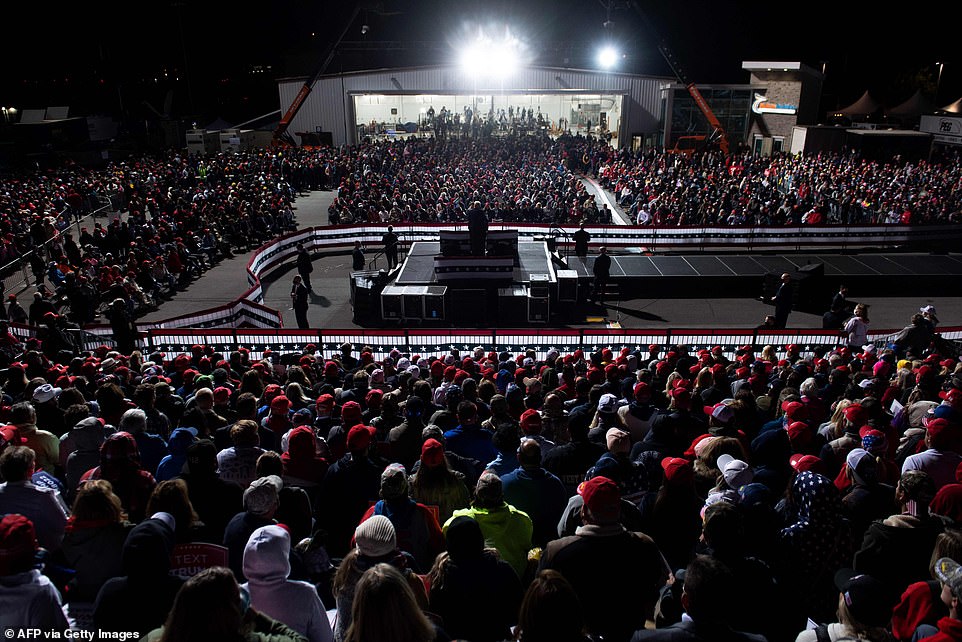 Donald Trump appeared to be having a Bill Clinton moment when he told supporters ‘I feel your pain’ about the coronavirus at his rally Tuesday night.

During the 1992 race for the White House, Clinton’s ‘I feel your pain’ speech was the most famous moment in the second presidential debate between him and then-President George H.W. Bush.

The candidates were asked by an audience member how economic issues had personally impacted them and how they could relate to people hard hit by national debt.

‘How has the national debt affected each of your lives, and if it hasn’t, how can you honestly find a cure for the economic problems of the common people if you have no experience in what’s ailing them?’ a woman asked.

Bush started speaking about interest rates and seemed to struggle to find a personal anecdote to which the woman responded: ‘How can you help us if you don’t know what we’re feeling.’

Clinton then delivered his ‘I feel your pain’ answer describing how he, as governor, he saw firsthand the impact on the lives of residents.

‘I’ve been governor of a small state for 12 years. I’ll tell you how it’s affected me. Every year, Congress and the president sign laws that make us do more things and give us less money to do it,’ he said.

‘I see middle-class people whose services have gone down while the wealthy has gotten tax cuts. When people lose their jobs, there is a good chance I know them by their name. If the factory closes, I know the people who ran it.’

Many believe this moment won Clinton the election.

This moment also came off the back of Clinton’s first ‘I feel your pain’ moment during a New York City fundraiser – this one also about a deadly virus.

AIDS activist Bob Rafsky was demanding answers over what Clinton would do to tackle the AIDS epidemic ravaging the country.

Clinton told him ‘I know how it hurts. I’ve got friends who’ve died of AIDS’.

‘I feel your pain, I feel your pain, but if you want to attack me personally you’re no better than Jerry Brown and all the rest of these people who say whatever sounds good at the moment,’ he said. 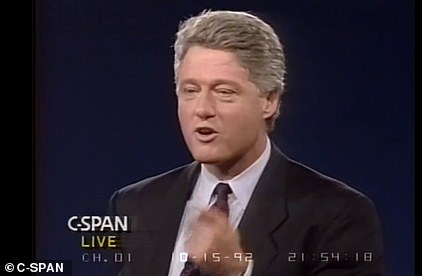 Clinton’s ‘I feel your pain’ moment in the 1992 election

Trump claimed at his rally that he was now immune from the virus after his four-day stint in hospital where he was treated with Ebola drug remdesivir – that was previously only available to very ill patients – supplementary oxygen and experimental antibody cocktail Regeneron.

‘I’m immune,’ the president said, adding he could kiss the crowd.

‘I could come down and start kissing everybody. I’ll kiss every guy. Man and woman.

‘Look at that guy, how handsome he is. I’ll kiss him. Not with a lot enjoyment, but that’s OK.’

Trump said he ‘felt like Superman’ and asked audience members at his packed rally if they had also had COVID-19.

‘You’re the people I want to say hello to because you’re right now immune,’ he told them.

Later, however, he expanded who he’d greet, again telling supporters he’d kiss every one of them just days into his recovery from COVID-19.

The president also scoffed at the changing science over immunity, pointing out that scientists at one point thought people infected with the coronavirus who recovered were then immune for life.

‘Once I got it, they give you four months,’ Trump complained. ‘Anybody else but me, you’re immune for life.’

Doctors still don’t have a clear answer about COVID-19 immunity, especially in light of the Nevada case where a man has now been infected twice.

An elderly woman in the Netherlands became the world’s first death of an individual to catch the coronavirus twice.

Trump said the US is ’rounding the corner’ on the virus, despite cases continuing to rise and more than 210,000 Americans now dead from the pandemic.

The Tuesday night rally in Johnstown, Pennsylvania marked the second time the president was back on the campaign trail since falling ill from COVID-19.

Trump’s rally was being held at the John Murtha Johnstown-Cambria County Airport, named after the late Democratic lawmaker who represented the area in Congress for 36 years.

It’s since become Trump country, but Democratic rival Joe Biden has made a point to earn it back.

‘You damn well better vote for me Pennsylvania,’ Trump said.

At Trump’s Tuesday rally, he had a number of nasty things to say about Biden, calling the former vice president not nice and a ‘dummy.’

‘And you know Biden he can’t stand up to the lunatics running his party, he can’t even find his way off the stage without them,’ Trump said.

‘He said he’s a Mormon, he was talking about Mitt Romney. He forgot Mitt Romney’s name. Can you imagine that? Then he didn’t know where he was,’ Trump went on. ‘He’s shot folks, he’s shot.’

The comment came minutes after Trump referred to the ‘mayor of Russia’ as he tried to make a dig about Biden’s son, Hunter. 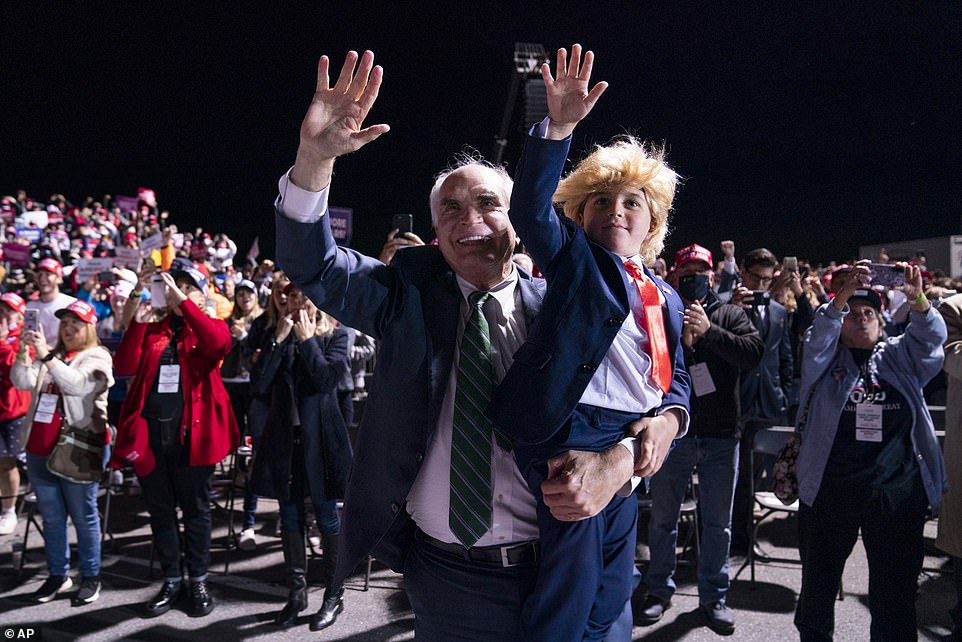 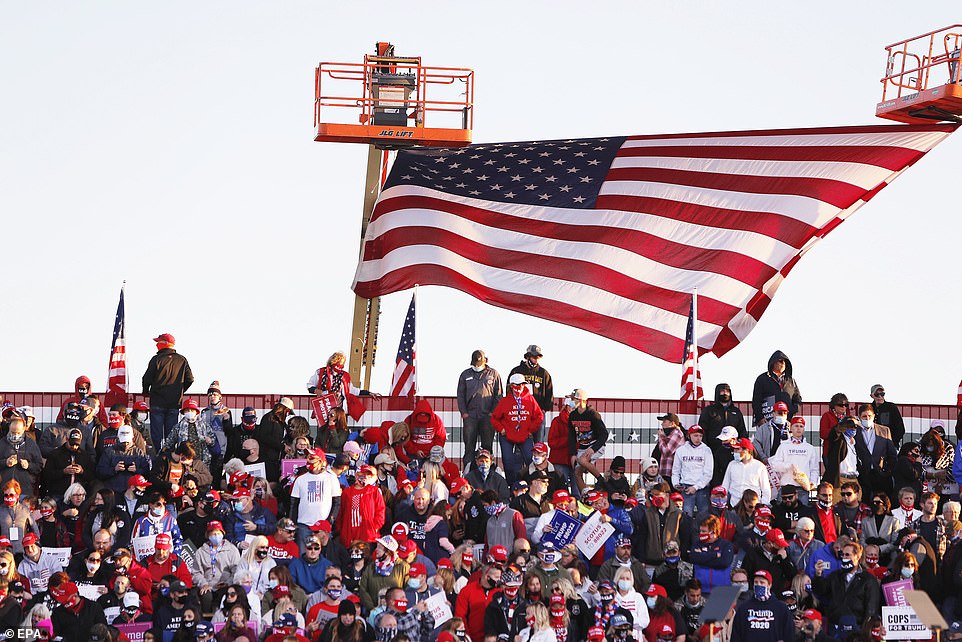 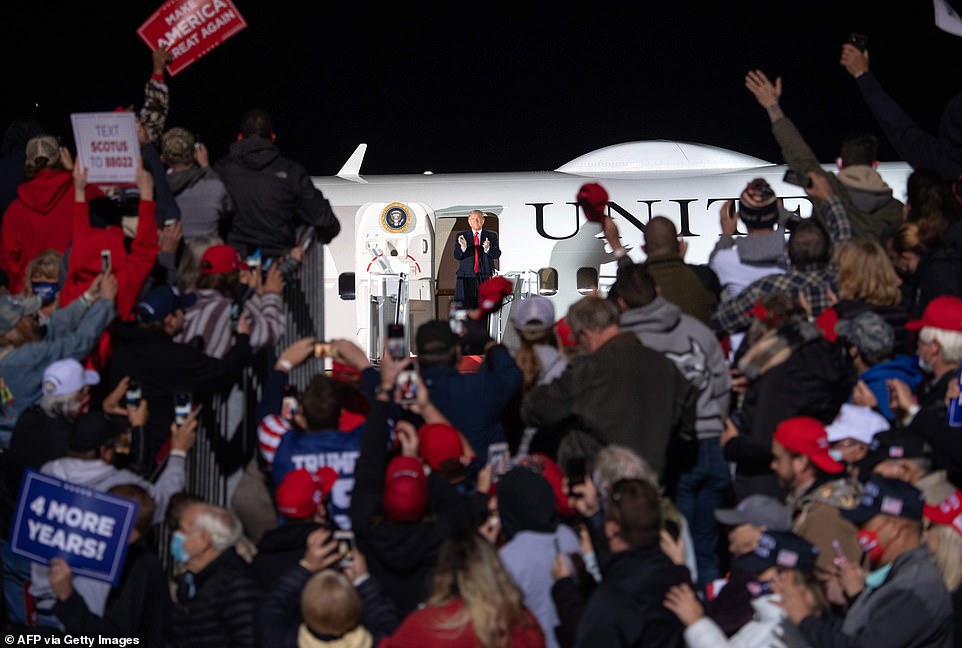 The president’s supporters can be seen reacting to his arrival Tuesday night in Johnstown, Pennsylvania, the second night he returns to the trail after contracting the coronavirus 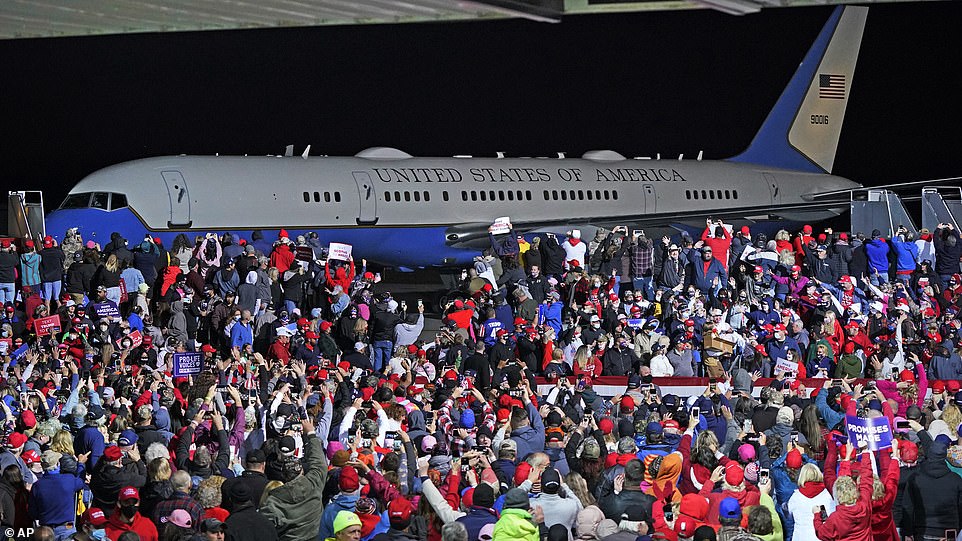 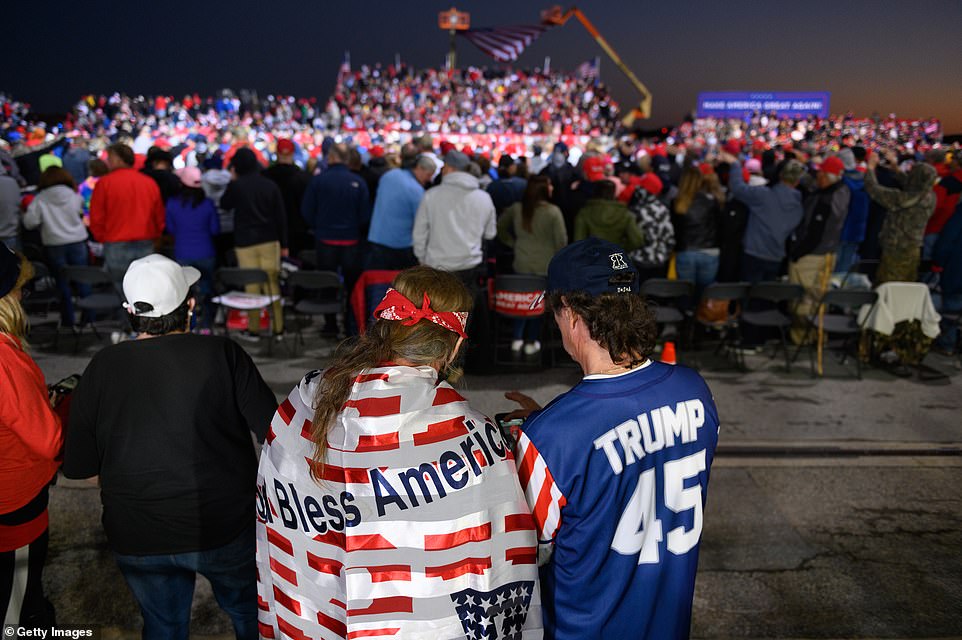 ‘To everyone fighting to recover from the virus, I feel your pain because I’ve felt your pain,’ Trump told the thousands of supporters packed in on the airport tarmac in Johnstown Tuesday night 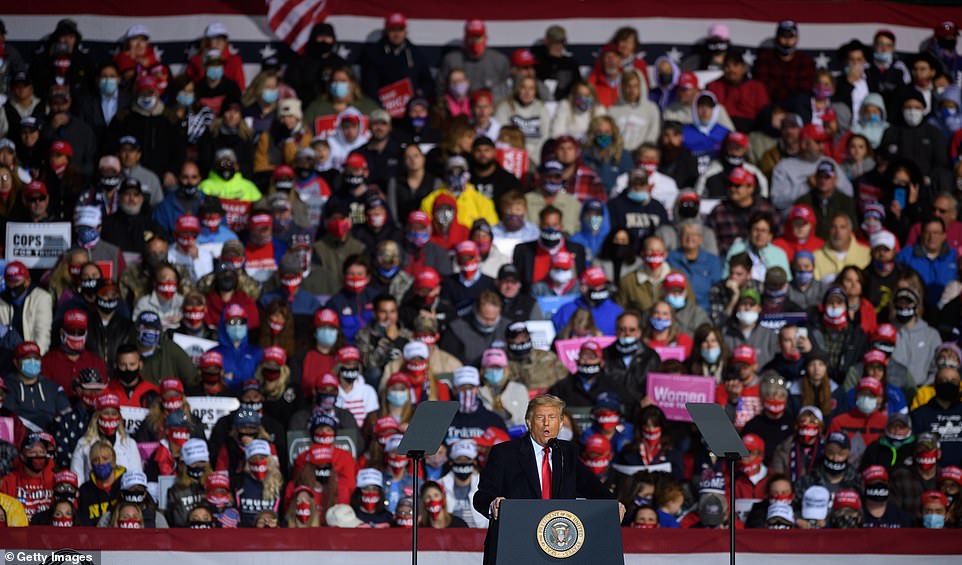 Trump’s claims of immunity to the crowd come one day after the US confirmed its first reinfection of COVID-19, of a young male with no pre-existing health conditions 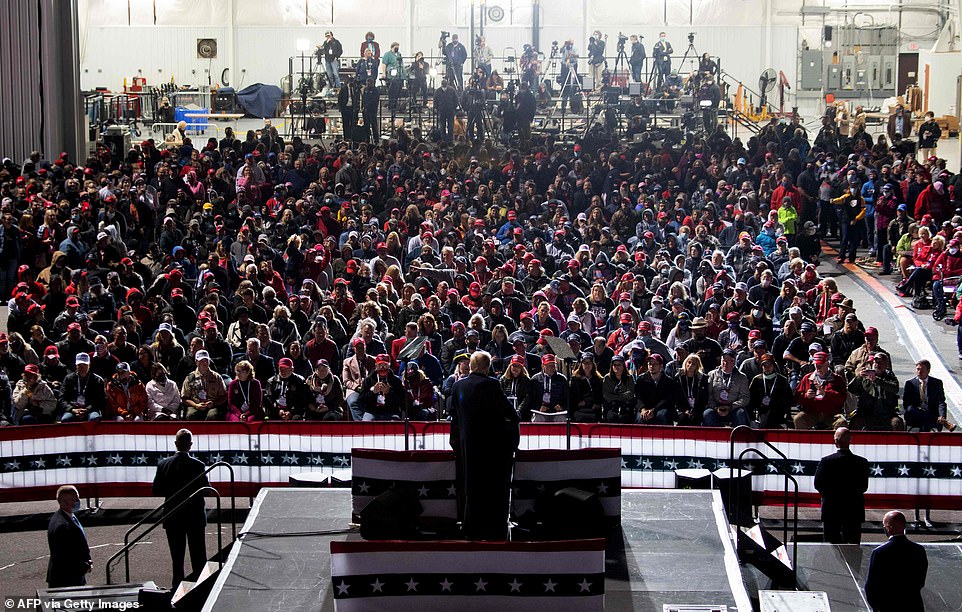 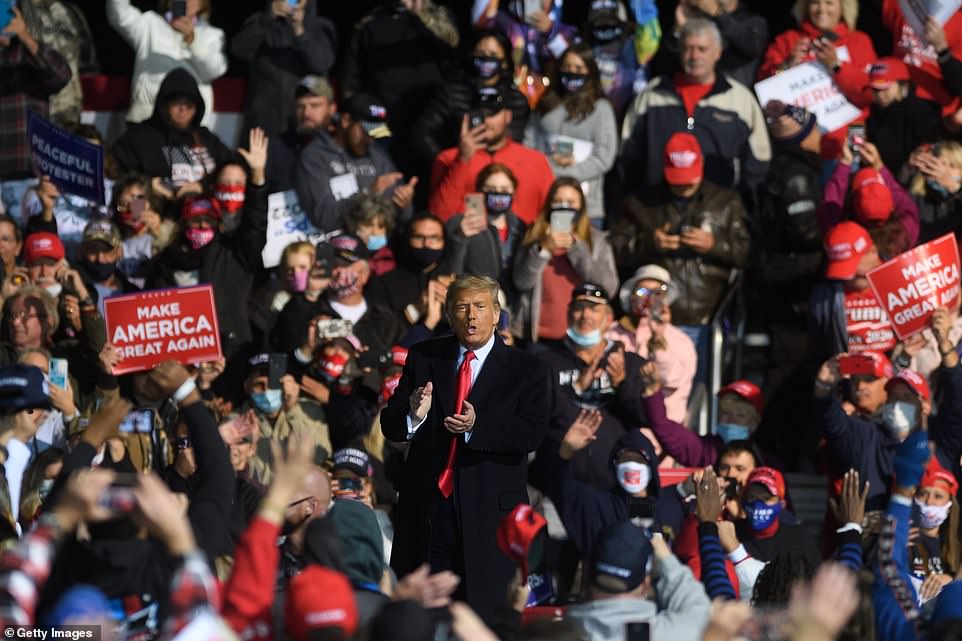 ‘That was a town hall for a child, a young child, Barron Trump – actually Barron’s far too advanced for that town hall,’ the president joked.

And he said he ‘probably spent more time’ in Pennsylvania – because he went to Penn in Philadelphia – than Biden, who grew up in Scranton.

‘I’m running against the single worst candidate in the history of presidential politics, and you know what that does, that puts more pressure on me,’ Trump told his raucous crowd – who weren’t practicing social distancing.

‘Can you imagine if you lose to a guy like this?’ Trump asked. ‘It’s unbelievable, it’s disgusting, it’s disgraceful.’

‘I just watched her on television coming in. That’s the great thing about Air Force One, we have more televisions –  they’re in closets, they’re all over the place. They’re on the floors, they’re on the ceilings,’ Trump said to laughs. ‘And I watched her and I compared her to Amy, great future Supreme Court Justice.’

‘And I will tell you Amy’s made a great impression,’ Trump said.

While Trump was in flight between Joint Base Andrews and Johnstown, Harris was questioning Trump’s Supreme Court pick, Amy Coney Barrett, as part of the day’s Senate Judiciary Committee confirmation hearing.

Trump knocked another member of the Judiciary Committee too, calling New Jersey Sen. Cory Booker a ‘loser,’ while suggesting he would run a program withing a Biden administration to ruin the suburbs.

‘Suburban women, will you please like me,’ Trump pled. ‘I saved your damn neighborhood, OK?’ 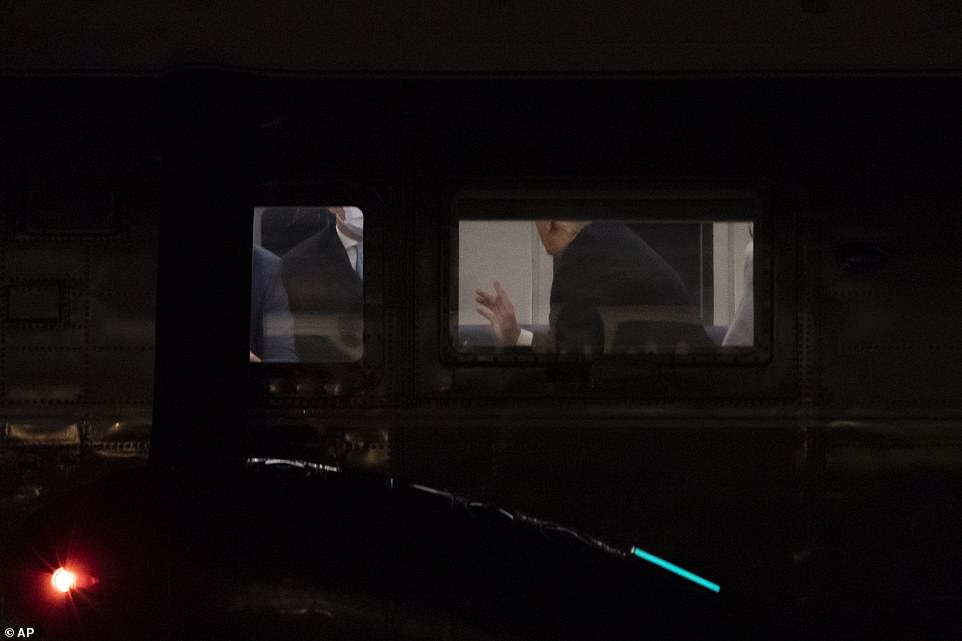 Trump speaks with White House senior adviser Jared Kushner as Marine One lands on the South Lawn of the White House on his return from the rally. Trump is maskless while Kushner wears a mask 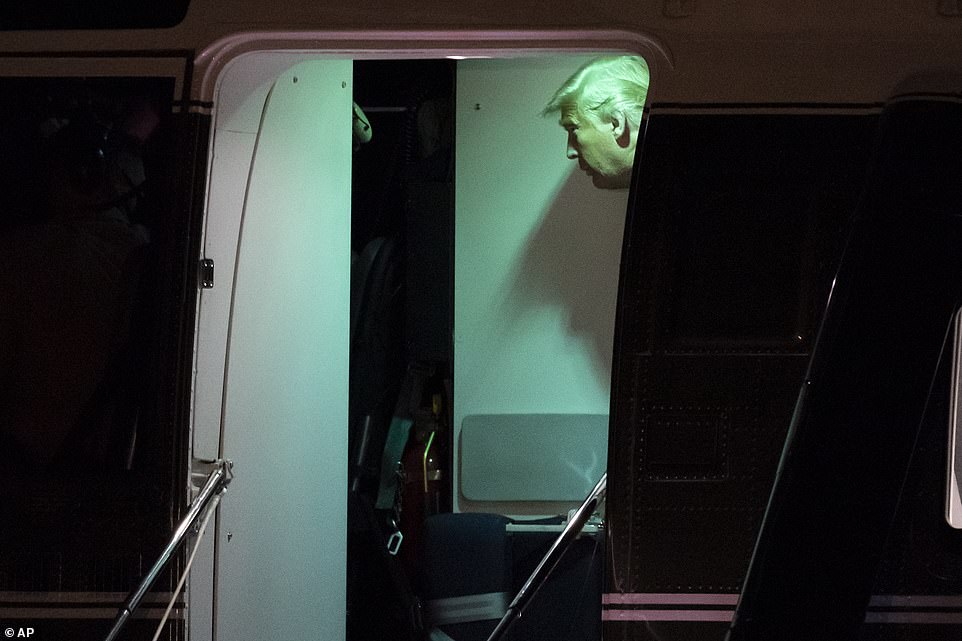 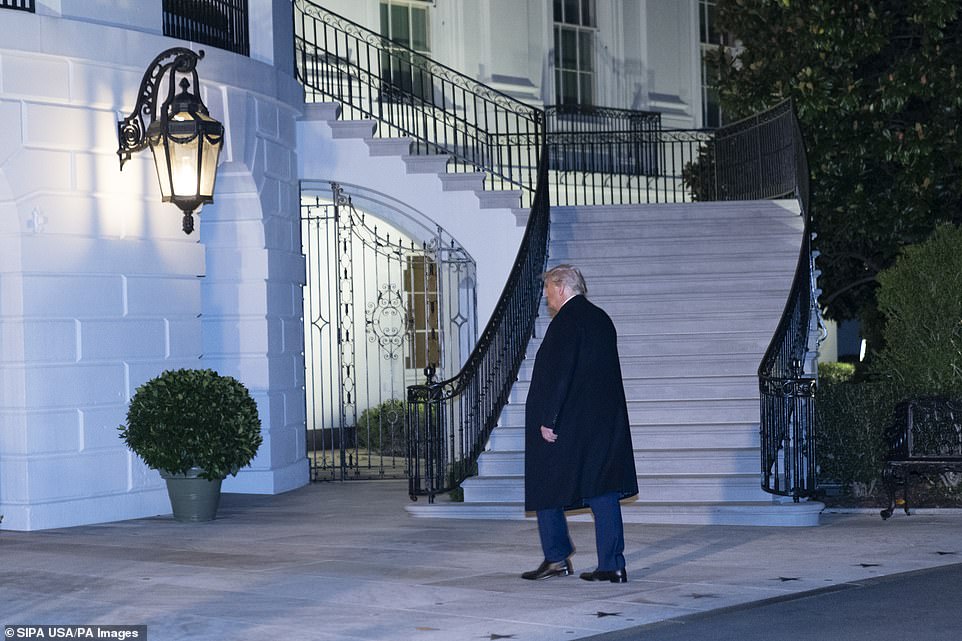 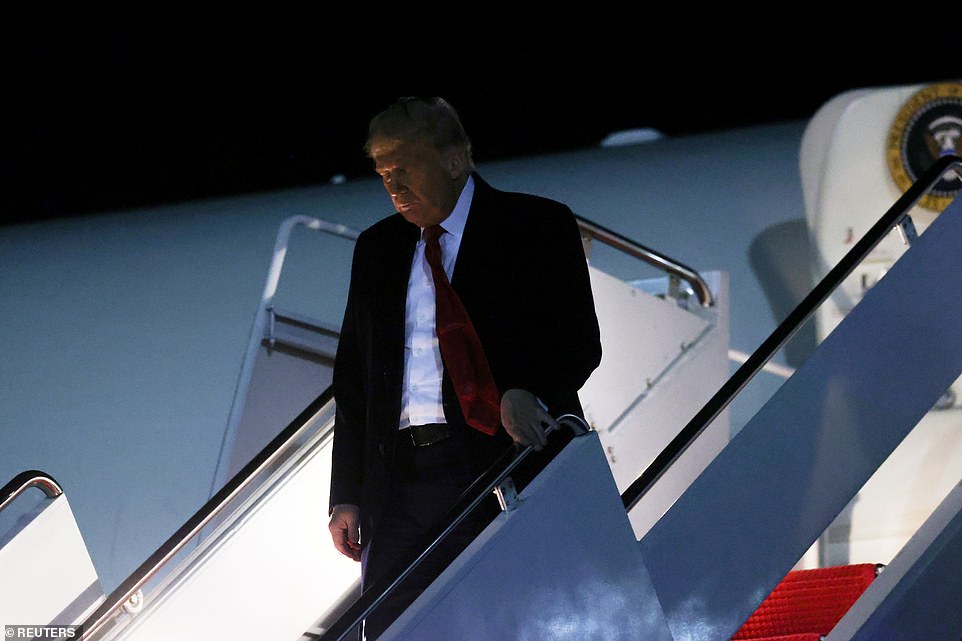 Trump channeled former president Bill Clinton at his Pennsylvania rally Tuesday when he told COVID-19 sufferers ‘I feel your pain’ after his bout with the virus. Trump exits Marine One after the rally 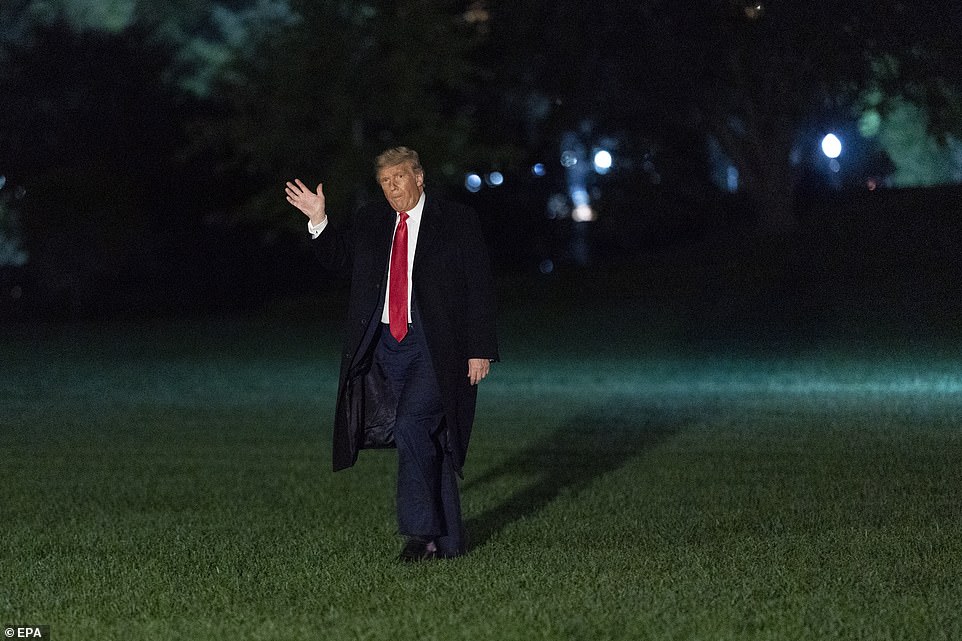 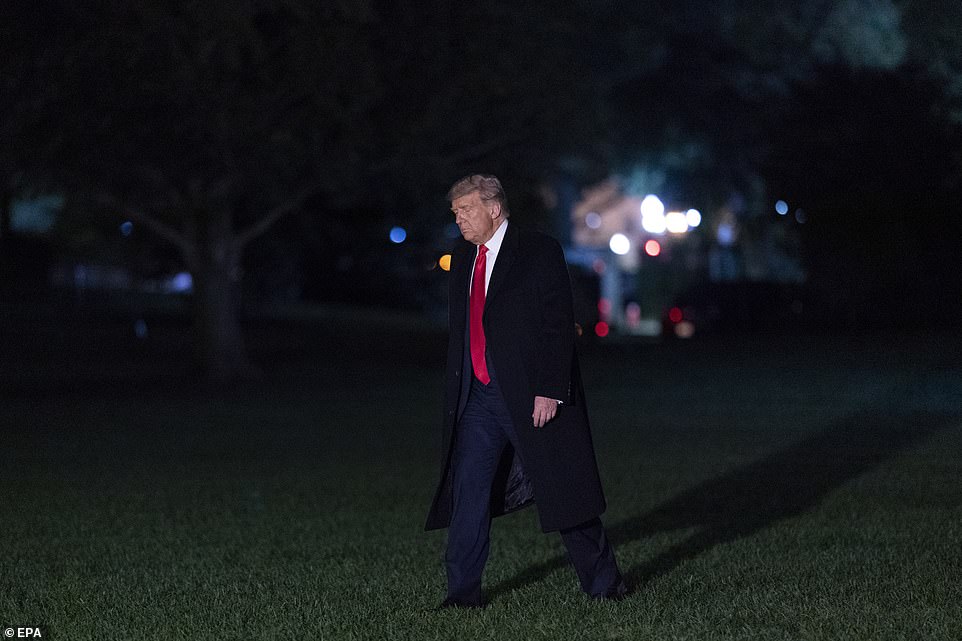 Trump also boasted he is now ‘immune’ from the virus and ‘felt like Superman’ as he vowed ‘we will beat it together’. He walks across the lawn back to the White House

The president explained that more than a quarter of suburban dwellers are minorities,  so when he says he doesn’t want low-income housing in those neighborhoods, he’s denying that it’s racially charged.

Booker, however, is one of just three black U.S. senators.

Suburban women are one voting bloc that could hurt Trump’s chances for re-election.

In Pennsylvania, Biden has been trying to chip away at some of Trump’s support, as the president won the state in 2016.

The day after his first – and, so far, only – presidential debate with Trump, Biden took a train trip through Ohio and Southwestern Pennsylvania with Johnstown marking his last stop.

Johnstown, the largest city in Cambria County, and known for its historic flood, was a Democratic area that’s gotten dramatically more red.

Then in 2016, is swung another 10 points when Trump led the ballot.

He received 67.3 per cent of Cambria County’s vote, compared to 29.6 per cent who chose Democratic nominee Hillary Clinton. 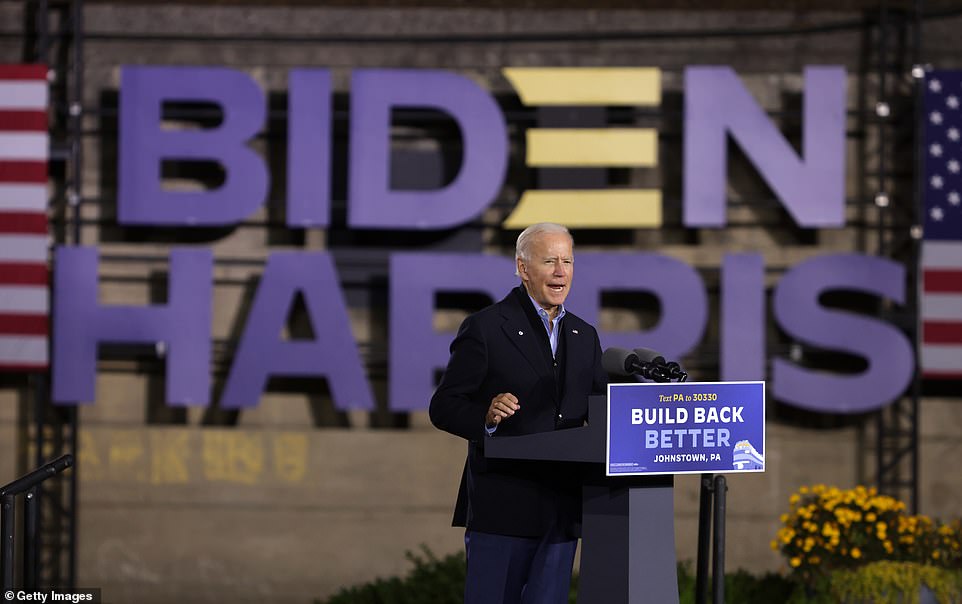 Joe Biden appeared in Johnstown, Pennsylvania on September 30 at the end of his Amtrak train trip through Ohio and Western Pennsylvania 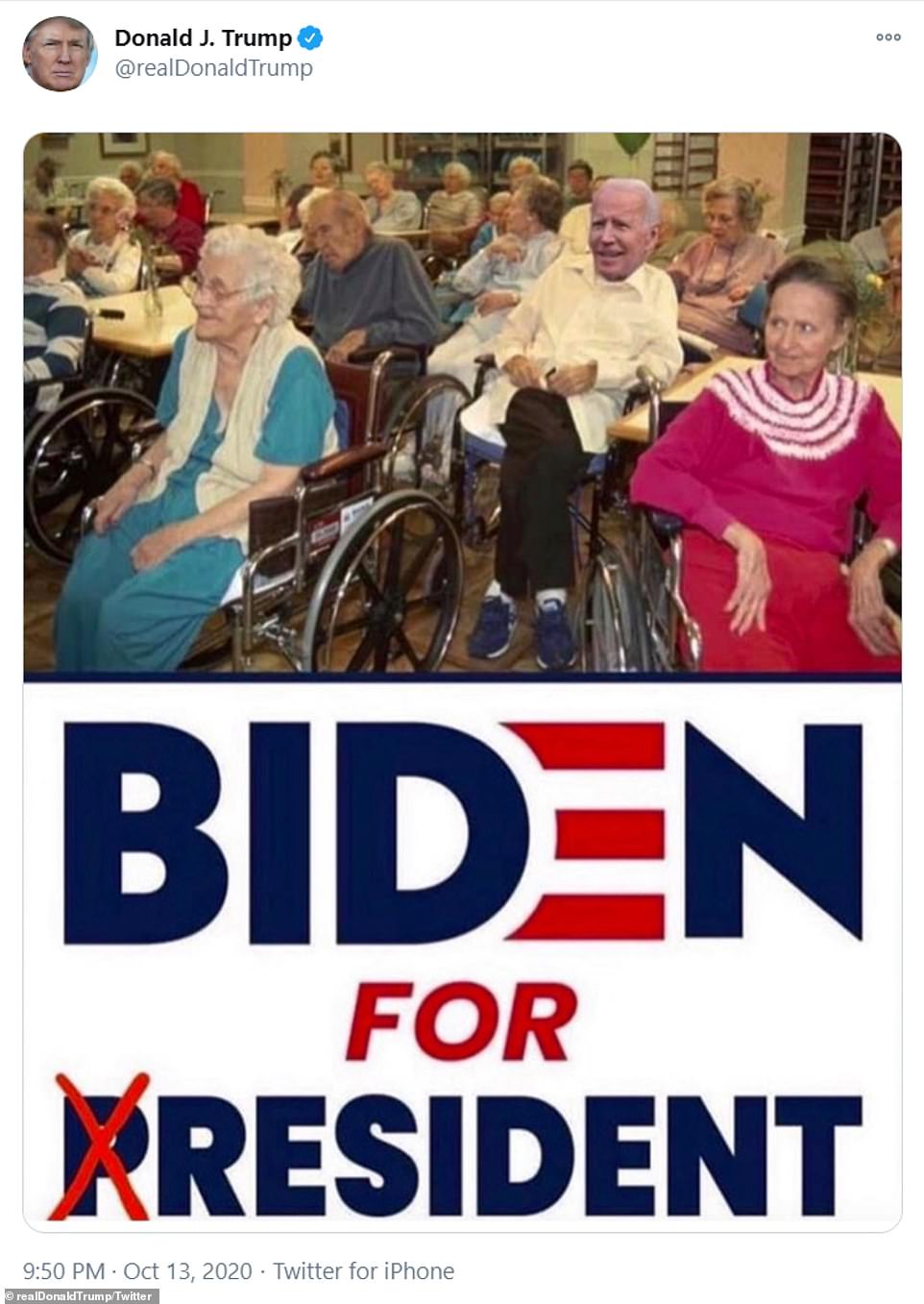 On Tuesday after his Pennsylvania rally, Trump tweeted a meme suggesting that Biden needed to be put in a nursing home – a questionable move as polls show the president tied or trailing Biden with seniors, a group that tends to vote Republican

As he boarded his plane after leaving his event at the Johnstown Amtrak station in late September, Biden told reporters he believed he could win some of these former Democratic-turned-Trump voters back.

Biden’s train journey also went through Latrobe and Pittsburgh, Pennsylvania, places where Trump held rallies before having to get off the campaign trail because he had contracted COVID-19.

Tuesday night’s Trump rally in Johnstown marks the president’s second time back on the road since recovering from the coronavirus.

Trump spent Monday in Florida, a state that’s even more of a must-win than Pennsylvania by Electoral College math.

But on Tuesday after his Pennsylvania rally he tweeted a meme that showed Biden in a nursing home labeled ‘Biden for Resident.’

It’s a questionable move as polling has found that Trump is trailing or tied with Biden with seniors, who tend to vote Republican.