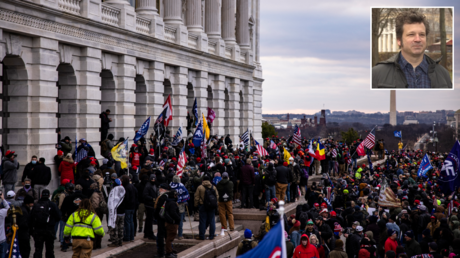 A Californian man seeking asylum in Belarus after American prosecutors charged him with storming the US Capitol building earlier this year has told RT he wishes he hadn’t been among those at the front of the crowd.

Speaking from the Eastern European nation as part of an interview set to be broadcast on Saturday, Evan Neumann outlined how he first found out he was among the so-called ‘domestic terrorists’ wanted by authorities for his role in the unrest.

“It was brought to my attention that I might be on that list, and I looked and it appeared to be me, and it said, ‘for assaulting a federal officer,’” he explained. “And I knew that I had not assaulted a federal officer.”

However, despite denying the charges, he admitted he wished he had behaved differently at the now-infamous January 6 riots in Washington. “I’d promised somebody that I would stand back in the crowd, and I didn’t hold to that promise. That’s the first thing that I regret,” Neumann said. “And I regret being rude to the police,” he added.

The supporter of former president Donald Trump is now seeking refuge in Belarus, having fled neighboring Ukraine after fearing he would be arrested and extradited back to the US.

He insists he is innocent and was not responsible for any altercation with law enforcement officers.